I’m often asked by students wishing to become costume designers what they need to study. The technical answers are sewing, drawing, dramaturgy, and art history. But the most important skill any of us can gain, I think, is empathy. Understanding the psychology that motivates different characters to behave the way they do is at the root of why we love to hear stories told. Empathizing with other people draws us closer together, and the depth of that relationship is more surprising if we had previously thought of those “others” as evil. The Siege of Calais revolves around forgiveness and the ability to empathize with our enemies, to see another human being as ourselves. 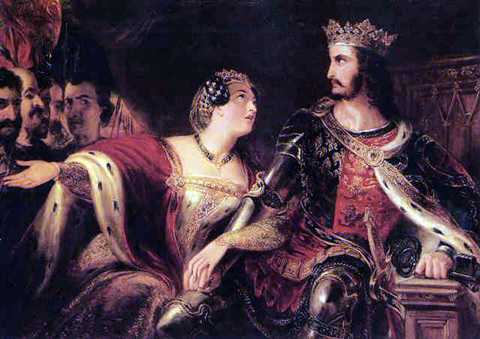 Frequently, audiences have three very different reactions when they see a production in historical dress. The first is to enjoy being transported back in time by the visuals of a bygone era, far away from their current troubles. The second is to be alienated and not feel able to relate to characters that are dressed so strangely compared to what they are used to. The third, which I hope to evoke, is to feel connected to history. By setting The Siege of Calais when it actually happened, in 1347, I wanted to remain true to the sacrifice of these brave people. However, to make the characters more relatable to a modern audience, I’ve chosen to omit the historically accurate headgear. You won’t see enormous pointed hats with delicate flowing veils on any of the women (which I don’t think they would be wearing after a year of suffering under a blockade anyway) and you won’t see any metal cone head helmets on the soldiers (reminiscent of Monty Python’s Holy Grail). Instead, I want the audience to see the emotion in the performers’ beautiful faces and feel connected with their struggle.