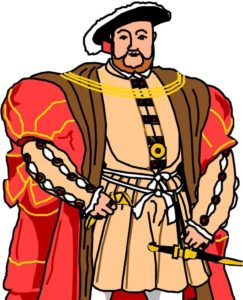 In the fall, when the days start getting shorter and the nights turn cooler, the opera season begins. But for me, the season starts long before that. It begins when our staff gathers for the big ‘reveal’, when Gil tells us what next season’s wickedly wonderful theme will be. In this case it was early March, and the theme would be The Tudors.  First up – Henry VIII by Camille Saint-Saëns.

After our meeting, while everyone else gets back to the business of our next production, I’m moving on to our next season. Ordering scores so I can study the operas, put together a breakdown of each act and scene, and start to think about casting. It’s absolutely the best part of my job.

I found the publisher for Henry and ordered a score. But since it’s not La Boheme or Carmen, it usually takes a long time to arrive. So while waiting, I found a score online. And a recording.

Then I listened, watching the measures go by. Sublime music, powerful, intense story.We have a winner, folks.

And then I’m seeing something I’m not hearing.  Back the recording up. Yep. Why didn’t they record that bit? And then another, and another.And then in Act III,seven scenes. Missing. And it’s pretty clear these scenes are important – you know, that part where Henry decides he’ll just create a new church so he can have his divorce from Catherine of Aragon.

It’s good to be King.

Generally speaking, there are two reasons this happens. One – the organization making the recording made some cuts. And it’s a long song, so that seemed plausible. Two – the score and orchestra parts they were using didn’t have this music. But now I’m intrigued, and I’m not willing to wait until the publisher sends the score and parts to find out the answer.

So to the internet, and incredibly, when I did a search for ‘Saint-Saëns, Henry VIII, missing music’, I got a bonafide hit.

And that’s where my journey with Henry VIII, Camille Saint-Saëns, and Hugh Macdonald began.

Don’t have your season pass to The Tudors? Buy a subscription before August 26th!

Get your subscription now!

Watch the video below to hear a sample of what we are doing this year!