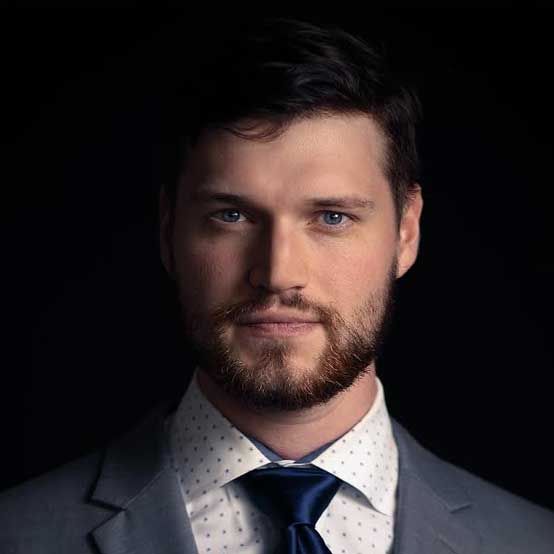 Keith Klein is a 27-year-old operatic Bass-baritone native to Kansas City, Missouri. A graduate of the Eastman School of Music (2018) and Florida State University (2020), Keith has a wide musical background and a rich, powerful voice. His singing career began with winning the 2014 KC Superstar competition and appearing on Season 10 of America’s Got Talent. Since then, he has been honing his craft in classical technique and singing for America’s most celebrated institutions. In 2021-2022 he returned to his hometown as a Resident Artist for the Lyric Opera of Kansas City to perform the role of King Melchior in Amahl and the Night Visitors and other outreach projects. His most recent engagements include singing as a Gerdine Young Artist with Opera Theatre of Saint Louis and as a Fleming Artist for the Aspen Music Festival and School. More recently, he was awarded an Encouragement Award at the Metropolitan Opera’s Laffont Competition and The Barbara and Stanley Richman Memorial Award. This past Fall, Keith performed the role of Sparafucille in Opera Colorado’s Rigoletto and the Sergeant in Pirates of Penzance as an Artist in Residence. In the Spring he debuted 3 new operas as a part of Opera Theatre of St. Louis’ New Works Collective, helping to realize the visions of new composers and collaborate in celebrating powerful stories and music.

Keith’s voice has been hailed as a “true bass…stood out, even in its very brief moment in the sun” (Susan Elliot, Musical America) and a “pleasing bass baritone…spews out a potent and rangy denunciation that shows a voice of considerable size” (James Sohre, Opera Today). Keith is incredibly excited to make his Boston debut with Odyssey Opera and is honored to be bringing the story of Dr. Oliver Sacks to the stage. He would like to dedicate this performance to his family, who have always been a pillar of support in his life.