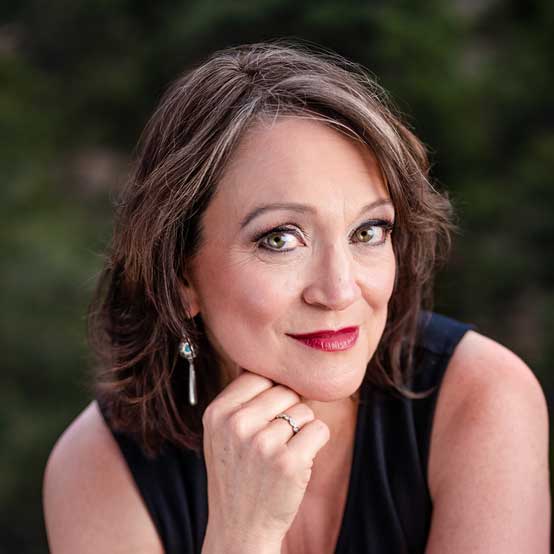 Opera News calls her “a natural actress…[a] powerhouse mezzo with thrilling, laser-like focus” and “luminous tone.” Opera magazine has praised her voice as “stunningly rich.” Katharine Goeldner’s unique gifts have taken her to stages and concert platforms throughout the U.S. and Europe in an astonishing range of repertory. Katharine’s performances in recent seasons include Fricka in Das Rheingold at Minnesota Opera; Fricka in Die Walküre with the Augsburg Staatstheater; a “deliciously slippery” (New York Classical Review) Annina in Der Rosenkavalier at The Metropolitan Opera; Herodias in Salome with the Minnesota Orchestra, Virginia Opera, Tulsa Opera, and at the Fisher Center at Bard College; Berio’s Folk Songs with the Mozarteum Orchestra of Salzburg; Verdi’s Requiem with the Jacksonville Symphony; Madam Larina in Eugene Onegin at the Santa Fe Opera, Lyric Opera of Chicago, and Michigan Opera Theatre; Brigitta in Die tote Stadt in Toulouse and and with RTÉ Dublin; and Marcellina in Le nozze di Figaro at the Dutch National Opera and Lyric Opera of Chicago. She created the roles of Jackie Onassis in David T. Little and Royce Vavrek’s JFK at Fort Worth Opera and later at Opéra de Montreal; Peggy Ophuls in Jack Perla and Rajiv Joseph’s opera Shalimar the Clown, based on the Salman Rushdie novel; and Ma Joad in Ricky Ian Gordon and Michael Korie’s The Grapes of Wrath at Opera Theatre of St. Louis: a production that moved to Michigan moved to MOT, where she won the Wilde Award for Best Performance in an Opera. Katharine returned to Opera Theatre of St. Louis in their 2022 season, as Iris Lev in the world premiere of Tobias Picker’s opera Awakenings. An Iowa native, Katharine studied at the University of Iowa and at Salzburg’s Mozarteum. She is a permanent resident of Salzburg, Austria.