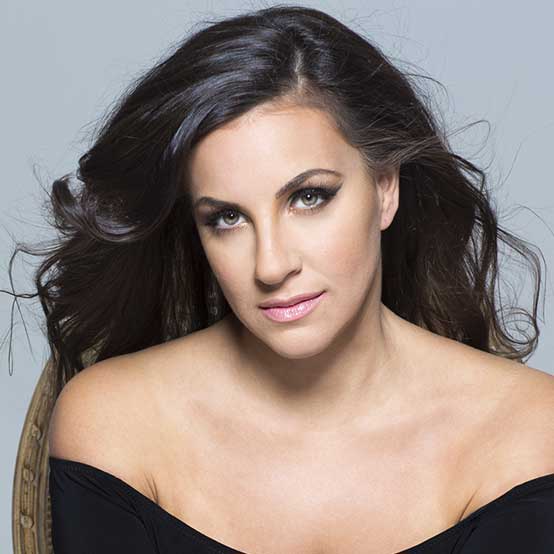 Of Joyce El-Khoury’s performance as Violetta in her recent Royal Opera House, Covent Garden (ROH) debut, the Independent wrote: “Her pianissimi are exquisite, her coloratura is bold, fearless and flawless, and the expressiveness of her sound grips the heart”.  She is embracing her gift for bel canto repertoire with the recent release of her debut solo album ‘Écho’ with maestro Carlo Rizzi and The Hallé Orchestra (Opera Rara).

The current season 22/23 already brought her to the Canadian Opera Company in Toronto, where she sang Micaela in Bizet’s CARMEN. At ABAO Bilbao she will give her house and role debut with the title role in Donizettis ANNA BOLENA, bevor she will sing Amelia in Verdi’s UN BALLO IN MASCHERA at the Tokyo Spring Festival. At the end of the season, Joyce will return to Opera Montreal to sing Cio-Cio-San in Puccini’s MADAMA BUTTERFLY.

Last season she gave her debut of MADAMA BUTTERFLY at Welsh National Opera, she returned to the Opera de Bordeaux for two gala concerts, to Toulouse as Anna in LE VILLI and returned to the Al-Bustan Festival for a solo recital. Furthermore, she will sang Leila/ LES PÊCHEURS DES PERLES at the Dallas Opera and gave her debut as Amelia/UN BALLO IN MASCHERA with the CSO in Chicago under the baton of Riccardo Muti. Later she made her debut at the Festival of Luzern and Grafenegg with Strauss VIER LETZTE LIEDER.

During the last seasons she gave her debut in Italy with concerts of Verdi´s MESSA DA REQUIEM at Teatro Massimo in Palermo under Riccardo Muti, followed by her debut of the title role of TOSCA at the Opera de Lille. Furthermore, she sang recitals in Strasbourg and gave ravishing performances as Tatyana/EUGEN ONEGIN and Liu/TURANDOT at the Canadian Opera Company, as Mimi/LA BOHEME with Australian Opera and Elisabetta/ROBERTO DEVEREUX with the Welsh National Opera and in a Gala performance in Karlsruhe. Other appearances included Recitals in Paris, Montreal and Toronto, Verdi’s REQUIEM in Toulouse and Mexico City, Beethoven’s 9th SYMPHONY in Prague and her debut as Anna/LE VILLI in Limoges.

After an acclaimed Glyndebourne Festival debut in the summer of 2017 (Violetta in LA TRAVIATA), Ms. El-Khoury opened her 2017-18 season in a gala performance with the NDR Radio Philharmonic (Hanover).  She returned to the ROH as Musetta in Richard Jones’ LA BOHEME, a production she revisited in her Teatro Real debut in December.  Joyce made a splash in her role debut as Imogene in Bellini’s iconic opera IL PIRATA (Opéra National de Bordeaux), a role she reprised in her company debut with Theatre St. Gallen in the spring.  She also appeared in recital with the Moscow Philharmonic Orchestra, and continued to explore bel canto repertoire in  a role creation in a never-before-heard Donizetti opera (Sylvia in Donizetti’s L’ANGE DE NISIDA) at the ROH this summer, in collaboration with Opera Rara whose new edition of the work was recorded for international release. She then premiered another world premiere with the Staatskapelle Weimar: Liszt’s SARDANAPALO.

In the 2016-2017 season, Ms. El-Khoury made several major debuts: first in London at the ROH as Violetta in LA TRAVIATA; with the London Philhamonic Orchestra in Rossini’s STABAT MATER, and with Opéra National de Bordeaux as Leila in LES PÊCHEURS DES PERLES. She also made role and house debuts with Opera Philadelphia as Liù in Turandot, and as Salome in Massenet’s HERODIADE with Washington Concert Opera.

Recent engagements include Violetta in La traviata with the Canadian Opera Company in Toronto, Musetta in LA BOHEME with the Bayerische Staatsoper in Munich and with San Diego Opera in Jake Heggie’s new opera GREAT SCOTT as Tatyana Bakst. Ms. El-Khoury garnered raves when she starred in the title role of MARIA STUARDA at Seattle Opera, replacing an ailing colleague in addition to giving her own scheduled performances, in some instances singing back to back performances. On the concert stage, Ms. El-Khoury debuted with the Orchestre de Paris in Rossini’s STABAT MATER, under the baton of Jesús López-Cobos, and performed in concerts in Austria with Elīna Garanča, and in Spain with Juan Diego Flórez.

Additional highlights include Joyce’s performance in the title role in Dvorak’s RUSALKA with the Concertgebouw; her company debut with Santa Fe Opera as Micaela in their production of Bizet’s CARMEN; her debut with Korean National Opera as Violetta in LA TRAVIATA; Verdi’s REQUIEM at the Al Bustan Festival in Beirut; LA BOHEME and Beethoven’s MISSA SOLEMNIS with the Munich Philharmonic.

Born in Lebanon and brought up in Canada, Ms. El-Khoury earned her Bachelor of Music at the University of Ottawa. She received her Artist Diploma from the Academy of Vocal Arts in Philadelphia and is a graduate of the Metropolitan Opera’s Lindemann Young Artist Development Program. She is a First Prize winner in many competitions including: the Loren L. Zachary Competition, the Opera Index Competition, the George London Foundation, and the Mario Lanza Vocal Competition.