Get to know our cast as they get to know each other and share their thoughts about creating a character, working together, and having a great time doing it! 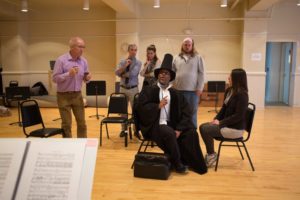 What are your thoughts after finishing the first week of rehearsals?

Kristen Watson: Opera is so fun! The entire process has been so playful – I love how dance-oriented Danny’s directing is, and it’s certainly added a cool twist to our character development.

When performing a role that is so rarely done, do you prepare for it any differently?

Jim Demler: Yes! More research is involved, yet there is a freedom in not having to compare yourself to other singers who’ve done the role thousands of times.

What is your favorite part of the rehearsal process?

Tascha Anderson: The community that is formed between the cast and creative team, the family that we create together, and the comradery that comes along with doing something so vulnerable and intimate together. I love the rehearsal process just as much if not more than the performance itself. 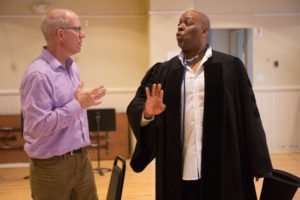 What aspect(s) of your character can you relate to?

Jim Demler: My character, like myself, can be a bit protective of his daughter! (mine is 11 years old)

Kristen Watson: Feigning sickness to get what I want 🙂

Tascha Anderson: Her playfulness, the fact that she likes practical jokes, and her flirtatious nature. I also love that Danny, our director, let her do a bit of dancing, because I have a dance background myself, and I always love the opportunity to marry my dance life and opera life in a show!

Who is your favorite character (who isn’t yours!)

Jim Demler: Martine is my favorite.

Tascha Anderson: Easy – Lucas, because he’s my husband! Also, I just adore Stefan and think he’s doing a hilarious and wonderful job with his character. He really helps brings all of the scenes to life, whether he’s singing or not (and his singing is beautiful). 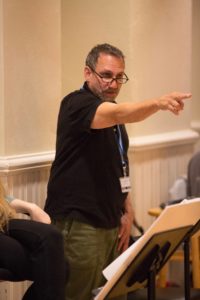 Any pre-show rituals you have that you would care to share?

Jim Demler: Pre-show rituals? I cook at home all day.

Tascha Anderson: Obviously lots of hydration, EXTRA good sleep (especially two nights before), and yoga. I also always look through my score right before the show starts, just to remind myself of certain dynamic markings or anything else that may have been forgotten during the staging process. And then, to be completely honest, I almost always get pumped up with Beyonce or something similar while getting dressed. 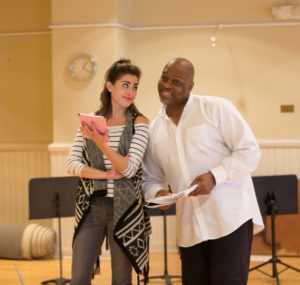 What do you do in your downtime?

Jim Demler: I go to my daughter’s horse shows and help my son with his car(s).

Tascha Anderson: I love spending time outside whenever I get the chance, and it doesn’t feel like the Arctic outside. I’m from Montana, so I love hiking, camping, fishing, etc. Even just going for a walk outside between rehearsals to get a coffee and some fresh air helps me recharge/reground.

Why should people see this opera?

Get your tickets for this delightful comedy!